Permalink to Launch of the booklet “Can you hear me?” at Design Week Shanghai

Launch of the booklet “Can you hear me?” at Design Week Shanghai 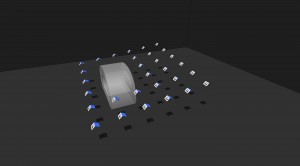 Whilst urbanist Su Yunsheng, founder of etopia, has been exploring ways of responding to the need for physical shelter for a humanity on the move, Petra Johnson has investigated non-material forms of shelter.  At Design Week Shanghai, 9th – 11th October at the Exhibition Centre, 1000 Yanan Lu these two approaches are presented together. The new prototype ‘egloo’ by Su Yunsheng and the booklet ‘Can you hear me’ designed by artist/architect Xu Zhifeng and Petra Johnson about their  collaborative project ‘kioskxiaomaibu’ will be launched alongside each other.

On Tuesday, 4th of December, Beijing-based artist LaoYan will be visiting Cologne, explore ‘walk with me’ and discuss future collaborations.

Lao Yan is currently in Germany on a residency with Akademie Schloss Solitude. 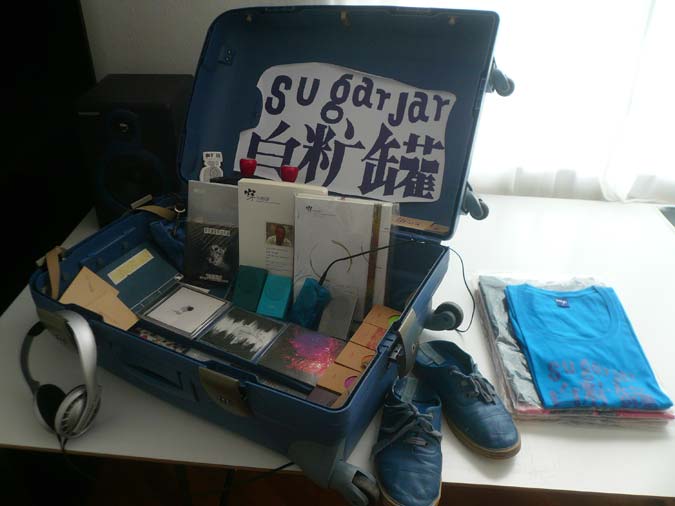 Permalink to HomeShop – kioskxiaomaibu link on the day of Qixi

HomeShop – kioskxiaomaibu link on the day of Qixi 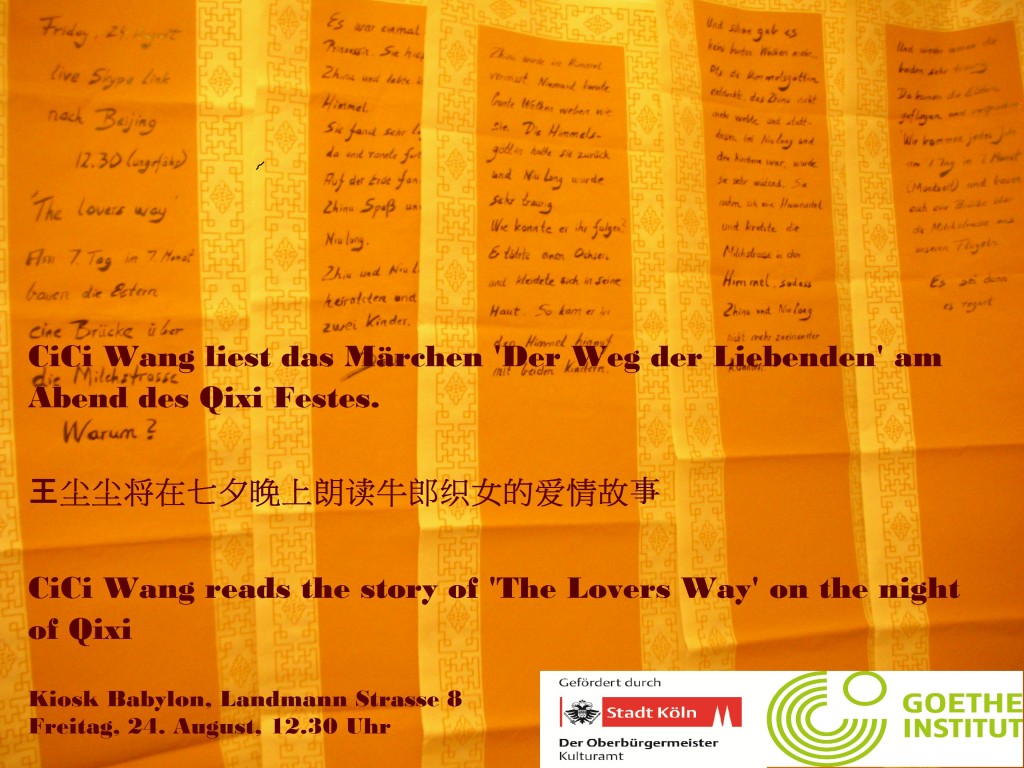 Once upon a time there was a princess. She was called Zhinu und lived in heaven. She got it very bored there and so she run away. Once on earth she found lots of fun and Niu Long. Zhinu and Niu Long married and had two children.
In the meantime in heaven, it was noticed that there were no colourful clouds anymore. And that no one could weave them like Zhinu. So the heavenly goddess went to earth and fetched her back and as a result Niu Long got very, very sad.
How could he follow her?
He killed an ox and dressed himself in the oxen skin. And so Liu Nong and the two children entered heaven and reunited with Zhinu.
Once again there were no colourful clouds in heaven. When the heavenly goddess discovered that Zhinu was with Liu Nong and the children, she got very angry. She took out her hairpin and scratched the milkyway between Zhinu and Niu Long. And the two were separated once again and cried bitterly.
The magpies heard of their sorrow and promised to come every year on the 7th day of the 7th month (lunar calendar) and build out of their wings a bridge across the milky way which came to be known as the lovers way.

The recording of the Chinese reading is unfortunately clipped at the beginning, we hope, you nevertheless enjoy the sound. 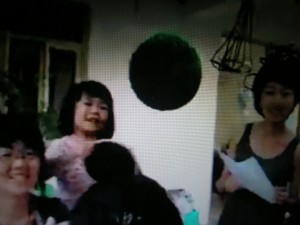 At the global conference ‘Sustaining Regional Futures’ organised by the RSA (Regional Studies Association) in the UK and Beijing University of Sciences, kioskxiaomaibu will be asking academics how effective its approach has been in presenting the status quo of localities across cultures by setting up a small counter showing its work under the heading:

The role of art in questioning the status quo

The session invites open discussions around a set of associated questions:

TOPIC:    How can we value and engage with the life of a locality?

www.kioskxiaomaibu.org is an NGO that takes advantage of current artistic, technological and ethical possibilities. It searches out local neighbourhoods in geographically distant places, identifies shared concerns and provides a platform for exchange via video streaming and Skype.

Tonight is the last performance by LinJingJing at Kiosk Babylon, Landmannstr. 8.

The opening of the street academy ‘walk with me’ initially planned for tonight has been postponed. There will be an installation and a space for discussion about the project between 11.00 and 19.00 o’clock at Neues Kunstforum, Alteburger Wall 1 as part of the open studio organised by Lin JingJing and Petra Johnson on Sunday, the 17th June.

Neues Kunstforum, Alteburger Wall 1 is in the South of Cologne, the closest tram stops are Chlodwigplatz and Ubierring. 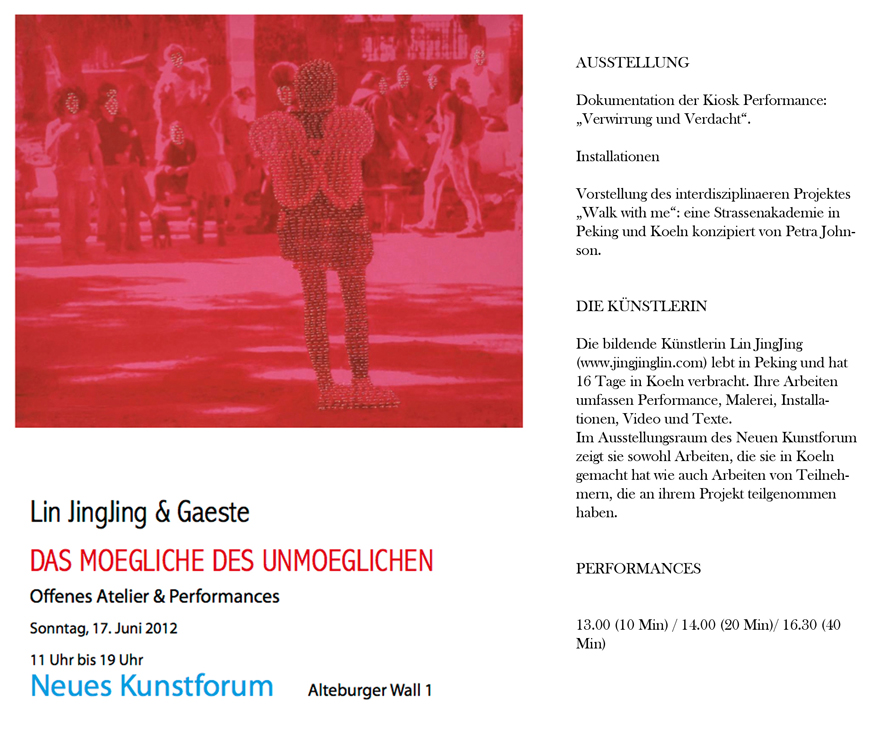 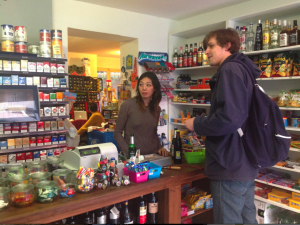 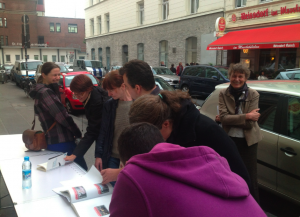 The opening night of Kunststation Kiosk Babylon was well received.

We discovered a multitude of strategies with which customers responded when they were not given that what they had chosen, but that what their shadow had chosen (more details will follow).

Many thanks for the generosity of spirit with which those who participated responded to this challenging situation – and we look forward to the revenge some have promised to inflict on us tomorrow night at the same time, same place.

Permalink to Verwirrung & Verdacht: Announcement in German of Intervention at Kiosk Babylon

Verwirrung & Verdacht: Announcement in German of Intervention at Kiosk Babylon

We would like to invite you to that other pre-occupation of kioskxiaomaibu:

How to create a ground free of ideology ? What are the rules that negotiate this ground?

Directions and times are given below in German: 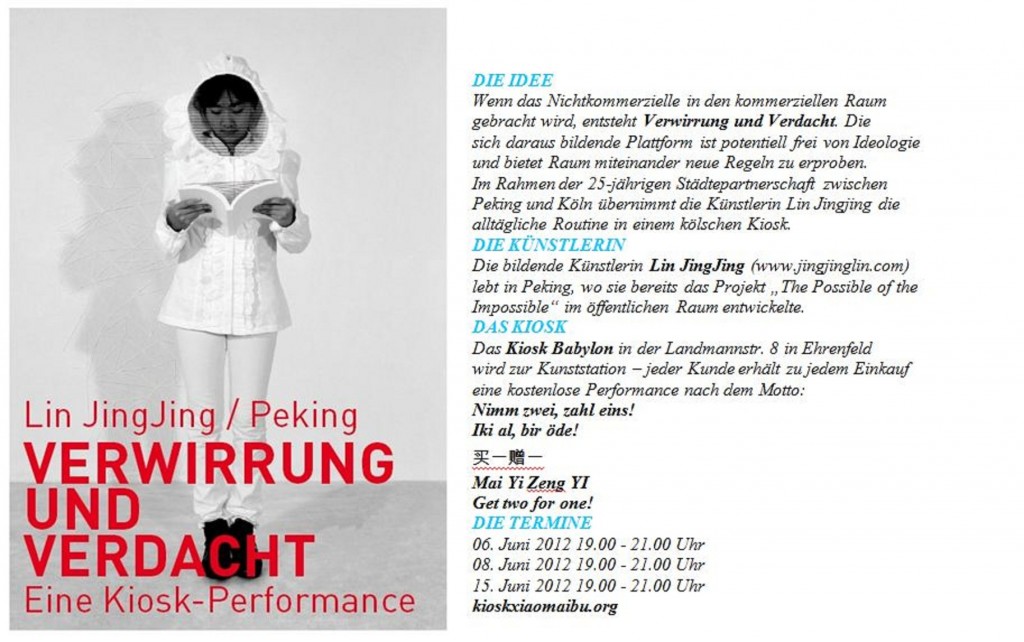 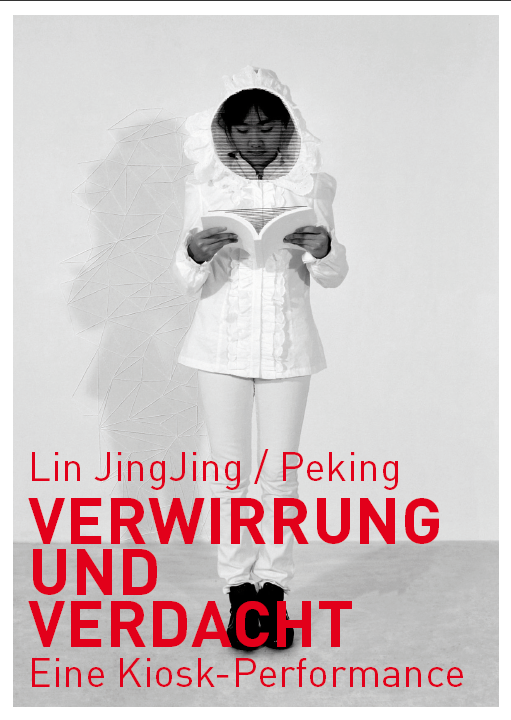 Preparations for the opening of Kunststation Kiosk Babylon are now beginning. On June, 6th an official opening is being prepared with visiting artst Lin JingJing from Beijing.

A kiosk is an area of sociability, a functional place – what happens when disciplines meet disciplines?

What happens when that well-known declaration ‘Everyone is an artist’ is transferred to sites. It is a debate that has a history  in the city of Cologne since the opening of Kunststation St. Peter, where religion meets art.

In traditional Chinese architecture the threshold is physically manifest. Often it is a substantial wooden beam painted purple. It brings bad luck if one steps on it. Instead the visitor is required to make one extra large step over it. Passing the threshold becomes a physical act.

These are the thoughts that accompany the current preparations: 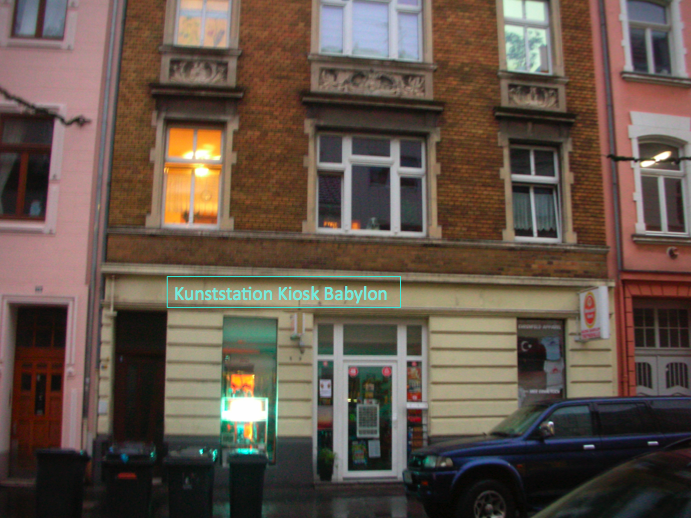